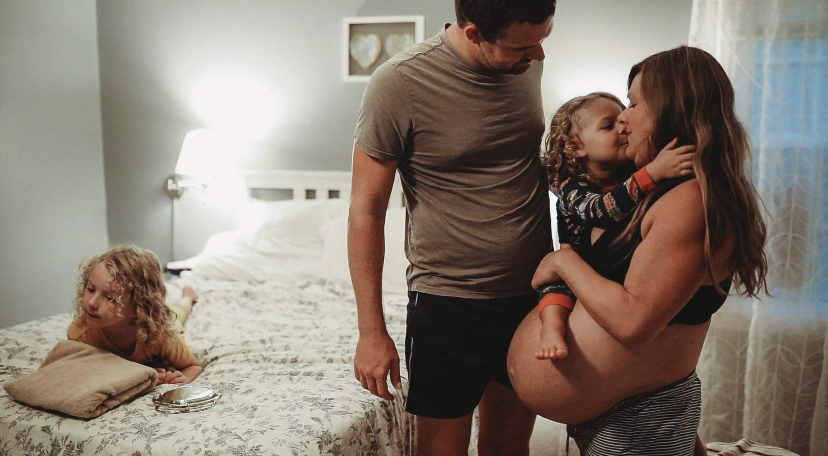 Does homebirth affect your partner’s involvement?  I’m excited to share Julia’s stories, as we see quite a difference in how she and her family were able to work together in the hospital versus the home.  This isn’t an aspect we’ve covered much on the podcast, and Julia’s story brings up some amazing points.  Let’s dive in!

Shout out to this week’s review of the week, Doula Danielle!  Thanks for this sweet review, Danielle!  If you have a moment, please head to apple podcasts to leave a 5 star rating and review for your chance to be our review of the week (and receive a Happy Homebirth sticker mailed to you)!

Once pregnant again, they prepared for birth with a Bradley class.  They found the information to be incredibly helpful, and they looked forward to a natural birth in the hospital.  However, once they arrived at the hospital, Julia struggled with the intensity, especially because her husband had to continuously be pulled away from her do paperwork, etc.

She was checked and realized she was only at a 4.  Because of the intensity and the expectation that labor would go on for hours, she agreed to an epidural.  Only 45 minutes later, she pushed her baby out.  She did have a terrible tear that shaped her postpartum experience.  It was very difficult to recover.

Julia had another miscarriage, and then shortly after became pregnant again.  With this pregnancy, she chose to go back to the same OB practice, as it had now added midwives (though the OB would still deliver the baby).

She still wanted a natural delivery, but her confidence was shaken.  She decided to hire a doula and assumed this would keep her from a medicated delivery.  However, once in the hospital, the story happened similarly to the first.  Things felt intense, but she was checked and found only to be at 4cm.  She tried to continue on laboring, but eventually said to her doula, “I can’t do this anymore- I want the epidural.” The doula agreed and went to fetch the Dr.  Julia remembers thinking, “Wait, I thought you’d talk me out of it!”

After receiving the epidural, she was checked 30 minutes later and found to be complete.  She did decide to wait longer until she felt an actual urge to push, so she waited 45 minutes.

Her baby was born soon after with minimal tearing.  She was able to use a hand mirror to see him come out, and the Dr. Helped her reach down and put the baby to her chest.  This postpartum was much easier without the severe tearing.

3 years later, Julia became pregnant again.  She decided to work with a CPM in NC, where midwives are unable to obtain licensure.  Julia lost this baby at 12 weeks, which has become even more devastating each time.  Especially this time, as they had shared the news with friends and family.

With her next cycle, Julia became pregnant with her most recent baby.  She chose to work with the midwives again, but decided to stay on care with her current OB/Midwife office throughout the 20 week anatomy scan so that she could have insurance coverage through that time.

The reasons she particularly wanted a homebirth: she wanted her kids and family involved, and she didn’t feel that she could have an unmedicated birth in the hospital.

On July 30th, Julia slept in until 10:30.  She stood up, and her water broke.  She went much of the day without contractions, so she spent time with her kids and prepared some snacks.

Around 6:30 she began feeling contractions.

At 8, she called the midwife.

Her husband and 6 year old were amazing supporters, both helping her through contractions.  Her son was so excited for a baby sister, and he was very happy to be involved with the birth.

At 10, Julia’s midwife checked her and found that she was at 6cm and baby was at -1 station.

The midwife told her it may helpful to get out of the pool, as contractions were so far apart.  Perhaps she should eat and walk around.  She had her husband go downstairs to get a snack, and at that moment, she suddenly felt her baby shift all the way down to crowning.  The midwives called for her husband and son, they came back, and she pushed her baby out in one contraction.

Julia felt so overwhelmingly loved and supported during her homebirth.  She felt like her husband was able to take on the perfect birth partner role now that he didn’t have to worry about all of the logistical issues of hospital birth. It was an incredibly redemptive birth.

1. Children can be amazing to have at the birth, and they generally handle it very well.  Especially when they have a job!  I loved having my daughter present for my second baby’s birth.  We had my sister here to help keep her entertained when necessary, but it was beautiful having her involvement as her baby sister was born.

2. Where you give birth can have an impact on how your partner is able to care for you.  This is huge, and such a great point to consider!  When you’re leaving the home, there will be more logistical issues, more tasks… simply put, more things for him to do and consider.  When staying home, he can be focused on caring for you.  This gives such a sense of empowerment to both parents, and allows for a family birthing experience.