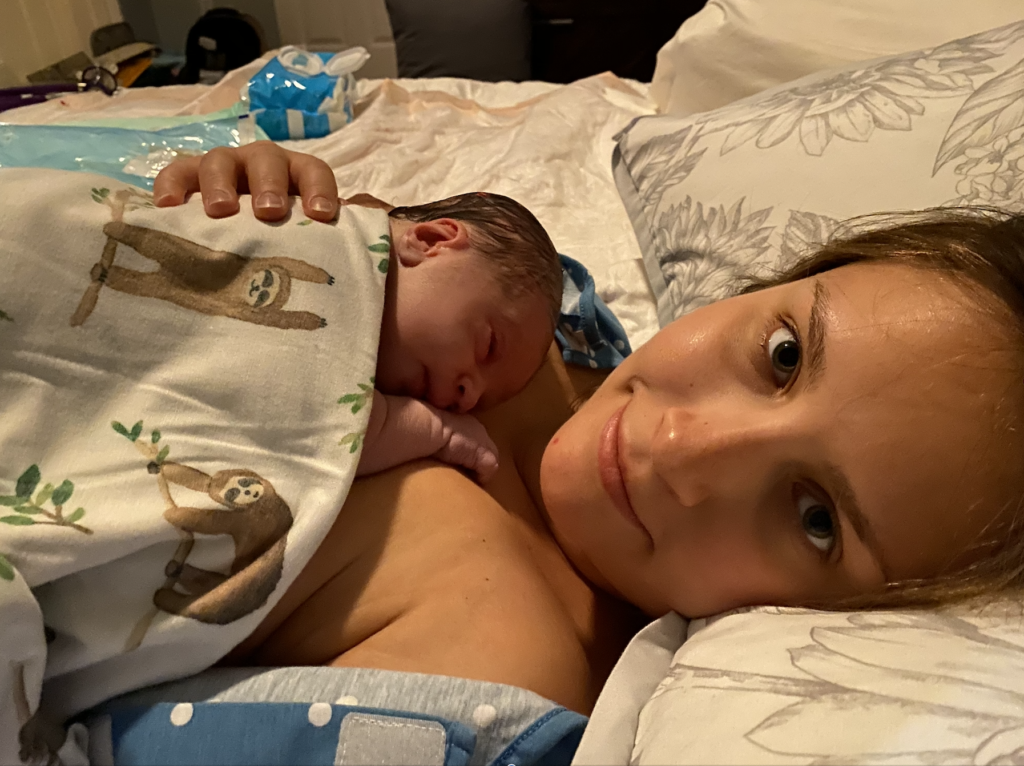 Let’s say you struggle with anxiety.  Does that automatically count you out as a candidate for homebirth?

Well if you haven’t heard, I’m hosting a totally free, totally awesome masterclass next week.  It’s called Homebirth Mythbusters: The 5 Myths You Need to Bust to Have a Happy Homebirth.

So…. Are you pregnant and considering homebirth?  Curious, perhaps, but you’ve got some reservations?  Or maybe you already know that you’re FOR SURE having a homebirth… either way, this free learning opportunity is for you!

I wanted to share Franchesca’s story in celebration of this event. Why?  Well, I’ll give you a two-fold reason.  First, Franchesca’s concern with homebirth was very anxiety-based.  However, as you’ll soon hear, she took steps to work through the anxiety, and decided to give birth at home.

Second, Franchesca is a successful graduate of my childbirth education program, Happy Homebirth Academy.  She used my course to prepare herself physically, mentally and emotionally to give birth at home.  Because I’m now hosting a FREE learning opportunity, I wanted to share a story from someone who entrusted me with their education and had a great experience with it.  So, what are you waiting for, and what do you have to lose?  Go sign up for Homebirth Mythbusters — right now!  There are several times and days available, and there will be a replay sent to everyone who signs up if the times don’t work for you.  But of course, try to show up live—so that I can answer your burning questions on the spot!

Go to myhappyhomebirth.com/mythbusters to reserve your seat now!

Franchesca and her husband grew up across the street together.  He was 3 years older than her.  They lost touch for 10 years, then reconnected.  They dated for a year and got married exactly a year later.

She “definitely didn’t want kids”, and her husband said he could go either way.

They got married in 2018.  About 4 weeks later, Franchesca began balling because she realized she wanted kids.  Her husband laughed and said that’s totally okay.

They waited until spring of 2020 to begin trying

They became pregnant on their first attempt

Franchesca wanted to use a private OB so that she would know who would deliver her baby.  She expected to use pain medication to avoid anxiety

Unfortunately, she did not mesh with her OB very well.  The OB was very nice, but did not understand Franchesca’s anxiety.  She seemed rather dismissive and would tell her, “You don’t want to rub anxiety off on your child…”

The midwife came over the same day and chatted with Franchesca.  Eventually, she asked— Have you considered homebirth?

Franchesca mentioned that she had big fears about emergencies, particularly related to bleeding.  Her midwife shared how she carries Pitocin and other medications should bleeding occur.

She decided to tell her OB her plans of laboring at home, especially when she found out that her OB was friends with the midwife.

One issue she had with the OB was that she was wishy-washy.  She said she supported Franchesca working with the midwife, then she suddenly began pushing the idea that she shouldn’t work with a midwife.

She began considering homebirth more, though she always allowed herself the feeling that if she needed to go into the hospital or wanted pain medication, she would easily go in.

Franchesca decided to purchase Happy Homebirth Academy.  She mentions the thoroughness of the course, and how knowing each step that your body is going through during labor is incredibly important.

At 37 weeks she was checked by her OB…. She said that she assumed she would be in labor within the week (She was only 1 cm dilated).

Towards the end of pregnancy, Franchesca began attempting to help her baby out: sex, nipple stimulation, red raspberry tea

On the day before her baby was born, she and her husband went on a walk, had sex, went on another walk, went to the mall and had a massage: Perfect recipe for labor!

Towards the end of the day, she felt like she was getting lots of downward pressure, and maybe even contractions.  She was trying to continue on with normal life, but it was very difficult for her to stay distracted.

She texted her midwife to let her know that she was having contractions, though they weren’t painful.  She told her to take a bath to see if they’d go away.  They intensified somewhat.

Her midwife told her to take a Benadryl and try to get some sleep if she could.

Her midwife came over and checked on her, then said she would give her the IV antibiotics for Group B Strep, though her veins are very small and difficult.  Her midwife allowed her to have an intramuscular shot instead.

She got in the birth pool at 3pm and stayed in until 8pm—when she was in transition.  At that point, she asked her midwife if it was too late to go to the hospital.  She said, “I can prep you, but if you want an epidural I’ll have to give you 2 bags of fluids first… by the time you get to the hospital and actually get the epidural, you’ll be ready to push a baby out.”

Finally her mom and husband asked if the midwife could break her water.  The midwife said, “let me check her first…” she went to check Franchesca, and her water burst on its own…. Suddenly Franchesca felt the deep urge to push.

Her baby began crowning, and she felt it was intense, but not her least favorite part of labor.  The head emerged, so her husband caught the baby and handed it to her.

Her midwife said, “At one point, I asked God to give you this experience so that you’d know that you are healthy and strong.”  Franchesca says that it did change the way she believes in her body.