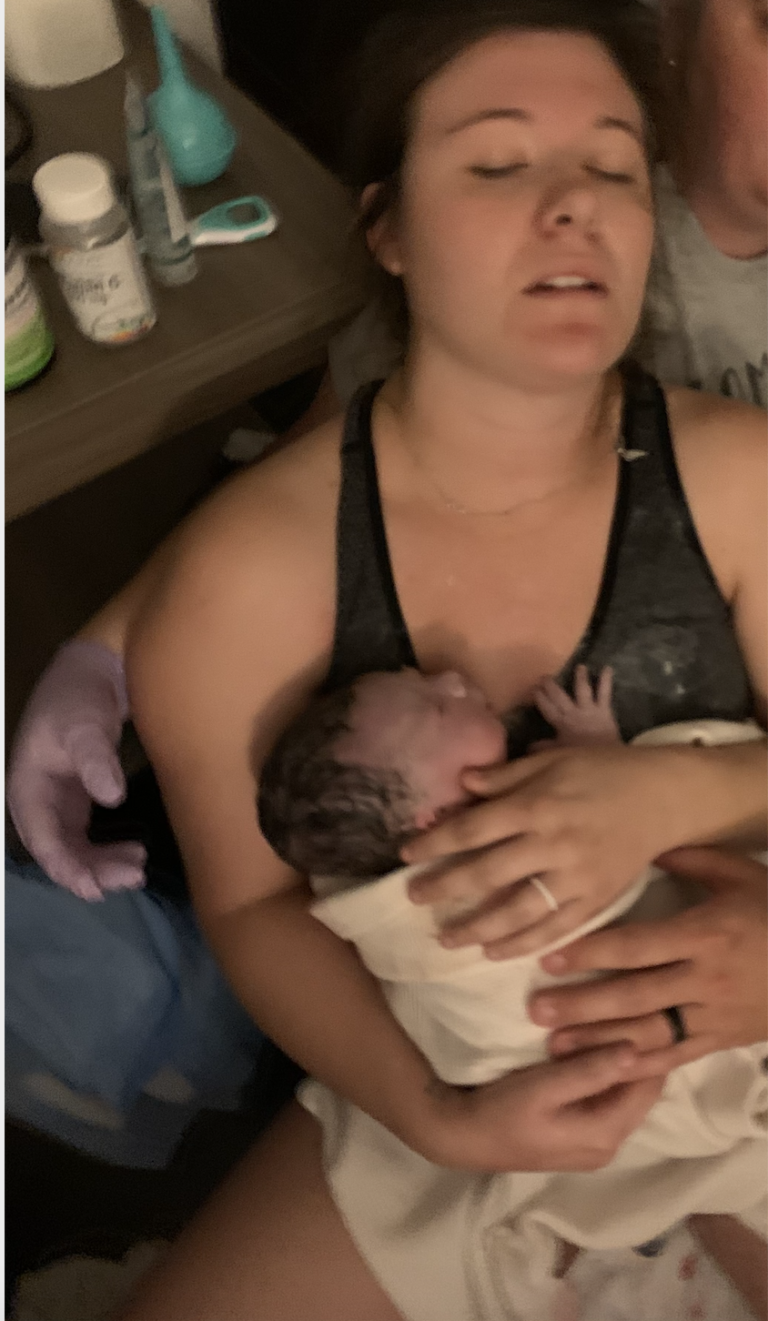 When you imagine your homebirth, what do you picture?  Where are you?  Maybe you’re laboring in your bedroom, your kitchen or living room….  But… do you picture yourself giving birth in a home other than your own?  Sometimes it happens, my friends, and we’ll learn today with Kadie’s birth story.

Kadie and Sarah, two sisters and two of my favorite gals, are going to share the very interesting, sometimes very difficult journey Kadie had to face throughout her pregnancy, and even labor.  But… as you’ll learn, a plan came together and Kadie was able to have her homebirth… even if it wasn’t in her own home.

Now before we jump into this super amazing interview, I want to remind you that Happy Homebirth Academy is back on the market for the general public!  New material has been added, and new bonuses are available.  We even mention one inside of the interview.  And… did you miss the free class Homebirth Mythbusters last week?  It was a PARTY.  I received so much positive, encouraging feedback from it, so I’m not done.  There will be ONE MORE opportunity to join this free masterclass this coming Thursday, February 18th.  Seriously you don’t want to miss this.  And there’s a live Q&A at the end, that has been fulllll of great information both times.  Ask me your burning questions!  So myhappyhomebirth.com/mythbusters is the place to go to reserve that seat.

let me thank our reviewer of the week, KaylinBattiste.

Thanks so much, Kaylin.  If you’ll email me at katelyn@myhappyhomebirth.com, I’ll send you a happy homebirth podcast sticker!

Speaking of that, if you have a free minute, would you head over to apple podcasts and leave a (hopefully) 5 star rating and review?  You guys are seriously the best at helping the show grow its reach, and this is just one way of doing it.  If you’re getting benefit from listening to the stories of these incredible mothers, would you spread the word?  I so appreciate it. 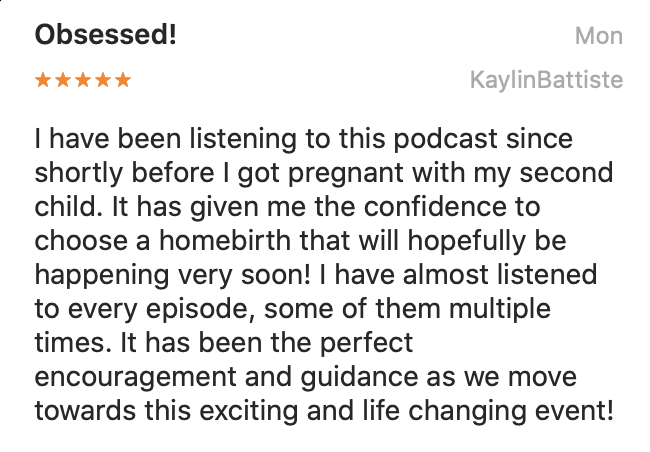 Kadie and her husband had to “work” to get pregnant- she and Jeff decided to try chiropractic care, and they became pregnant within 2 months.

She struggled while being pregnant during Covid because of zoom appointments and the lack of ability to hug and be close.

She planned to give birth in Georgia, but the relationship with that midwife fell through.  She realized she would have to change her plans

Sarah said, “Let me put something in place for you up here.”  Sarah called her midwife and asked if she’d be willing to attend Kadie’s birth if she came to town.  She said “yes!”  Everything fell together within 2 hours, and Kadie just went into her husband’s arms and collapsed with happiness.

Kadie came to visit on Thanksgiving, went back home to Valdosta, then 2 days after having gotten home.

On the way from Valdosta, Kadie booked an Airbnb (at 3 am!).  She slept as much as she could.

Sarah and her daughter went to a Dollar Tree to grab supplies to make birth affirmations to decorate the room.

It was important for Kadie to go into active labor— she was GBS+ plus her water had broken beforehand…. This put everyone on a bit more of a clock than normal

It was important to Kadie to allow her body to do whatever it needed to do.  With everything around her changing, she wanted a few pieces to be stable.

The one thing she envisioned was bringing her baby up to her chest.

Kadie did rest, but when she woke up, she threw up.  Because of Happy Homebirth Academy, she knew this was a “good sign”!

When Katelyn arrived, she was in the dark bedroom with her husband, Jeff.

Kadie moved to the living room, swayed with Jeff, kneeled on the floor, then sank to the floor.  She wanted to lay on the cold hard floor and wanted as much counter pressure as possible.  She laid on her side, and Sarah and Katelyn pressed her body into the floor.  The cold floor and the blue from the tv were very comforting in that moment.

Kadie went to the bedroom as she pushed.  She leaned over the bed, then somewhat “jellyfished” to the floor.  She lifted one leg into a runner’s stance.

Another moment that was very important to Kadie was feeling her baby’s head as she was pushing.

Kadie mentions how knowing what was going on with her body allowed her to feel comfortable… it also helps her remember very specific moments of her birth, where she connected what she had learned to what she was experiencing.

Kadie’s first words to her baby were, “Are you going to be a Mama’s Boy?!”

Katelyn remembers seeing Kadie lean back with a look of both exhaustion and complete peace.  A mixture of, “I just gave my everything, and now I have my Everything.”

Kadie’s husband then shouted out the baby’s name, which they hadn’t 100% decided upon.  He felt certain that the name Kadie wanted was the exact name that he was supposed to be named.

Kadie and Jeff did HHA together.  She loved the fact that she could go through the program, then as she got closer review many of the modules.

Kadie had to move to a new Airnbnb.  It had tons of massive stairs, so the men made a sling chair and hoisted Kadie up into the house (she was healing from a tear).

Kadie did have to deal with a great number of disappointments- having to move, having to switch to a birth in an airbnb instead of her new home.