For those of you who have given birth before—when did you KNOW you were in labor?  Was it a slow, gradual realization, or did you only know for sure when you started feeling your body pushing?!

For Megan, who dealt with prodromal labor for weeks…. well, it wasn’t until she felt herself pushing that she finally realized “Okay yep, this is definitely happening”.  Her second homebirth was vastly different from her first, as we’ll soon hear. 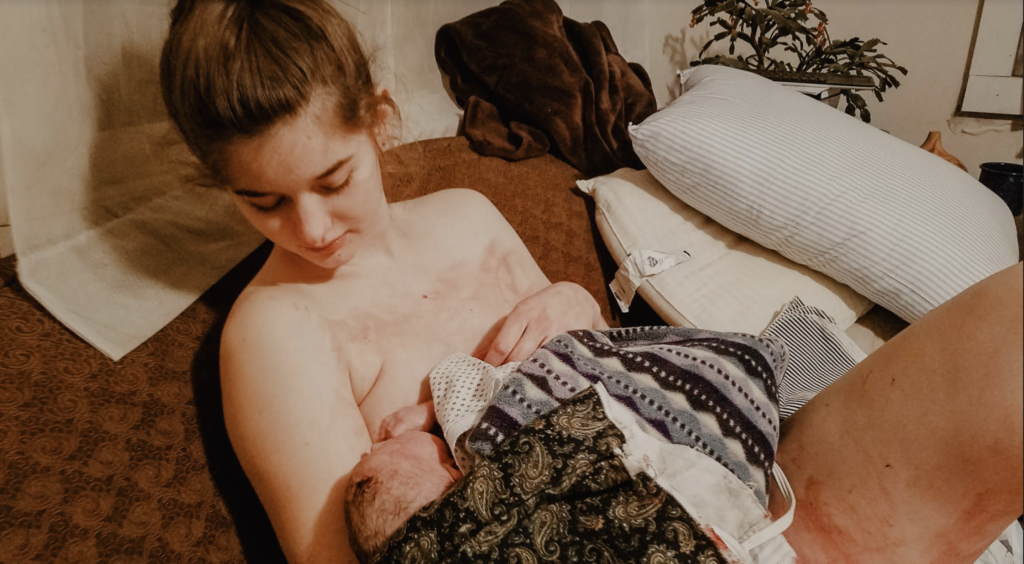 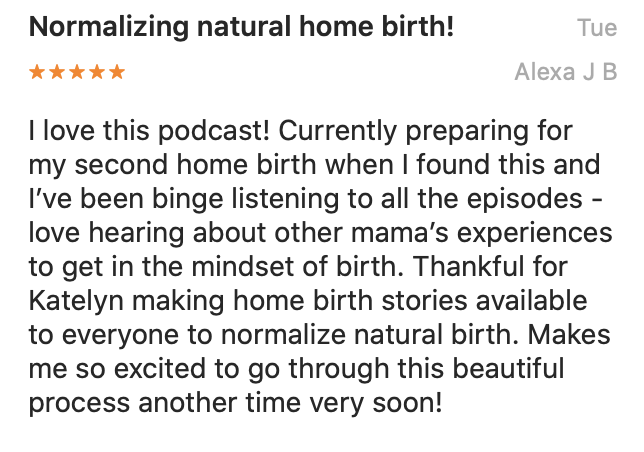 But before we jump into the episode, I’d love to thank our reviewer of the week, Alexa J B.  Thanks so much, Alexa!

And if you get just a moment today, would you mind hopping over to apple podcasts and leaving a rating… perhaps even a review?  It’s such a great, free way to support the show, and I’m so appreciative.  Here’s a link to get you there quickly!

Megan’s first baby—was lost to a miscarriage, but she feels like this baby saved her in a way.  She has Graves disease, and the doctors wanted to take out her thyroid.  They checked to see if she was pregnant, and she was.

Megan then decided to heal her thyroid with herbs

She became pregnant the next month, and began seeing the midwife who is the “family midwife”— This midwife has caught babies for her mother in law and sister in law!

With the first labor, she was in transition for 3 hours, then also had to push for 3 hours— She had cervical lip, which was highly uncomfortable.

She planned to have a water birth, but once she got in, it started sagging.  They realized the cat had put a hole in the birth pool, so Megan’s husband and midwife had to bail the pool as fast as possible while Megan sat on the couch.

She moved to the birth stool, the cervical lip finally released

She felt she didn’t “experience” pregnancy as much with her second baby, as she was trying to  keep up with her first babe.

She did the raw milk formula from Nourishing Traditions, which was very labor intensive.

Megan had prodromal labor for 3 weeks.

Because of the prodromal labor, she wasn’t certain she was actually labor until she was in transition.That night: she began have contractions, but that was common.  She made some tea, tried to relax, and then was suddenly DEEP into labor.

She’d been in labor for only half an hour when her contractions were lasting 60 seconds with only 60 seconds in between.

Even though her body began to push on its own, she was still in a bit of denial— she thought that she might still only be 2 cm.

As his head is coming out, Megan’s husband still has absolutely no idea what’s going on.  She lunges, and he says, “What are you doing!?”

Her midwife barely missed the birth.

She worried that having two children so close in age would be nearly impossible, and that she wouldn’t be able to function well.  This has not been the case at all!  She’s still been able to work her homestead, run an online business, and even can an entire year’s worth of food for her family.

What a fun conversation.  As we head into this week’s episode roundup, I’m thinking of how different everyone’s experience of not only labor, but also early motherhood can be with each baby.  I’m specifically thinking of how Megan was so concerned that her life would be incredibly difficult with two babies so close together— that she wouldn’t be able to get anything done— and then, it wasn’t that way at all!  I think of how if someone asks, “Which was the hardest transition— going from no children to one, or one to two, two to three…” when you ask 3 different mothers, you’ll likely get three different answers.  It’s an important reminder that each story and experience is different, and the best option is to go into the journey with an open mind, and a willingness to ask for help when we need it.  And hey, maybe we’ll need it, maybe we won’t! Maybe we’ll be able to be the one offering the help to someone else.  And Megan, I’ll still take you up on that offer to come can food at my house!

Check Megan out at:  www.wilsonhomestead.com