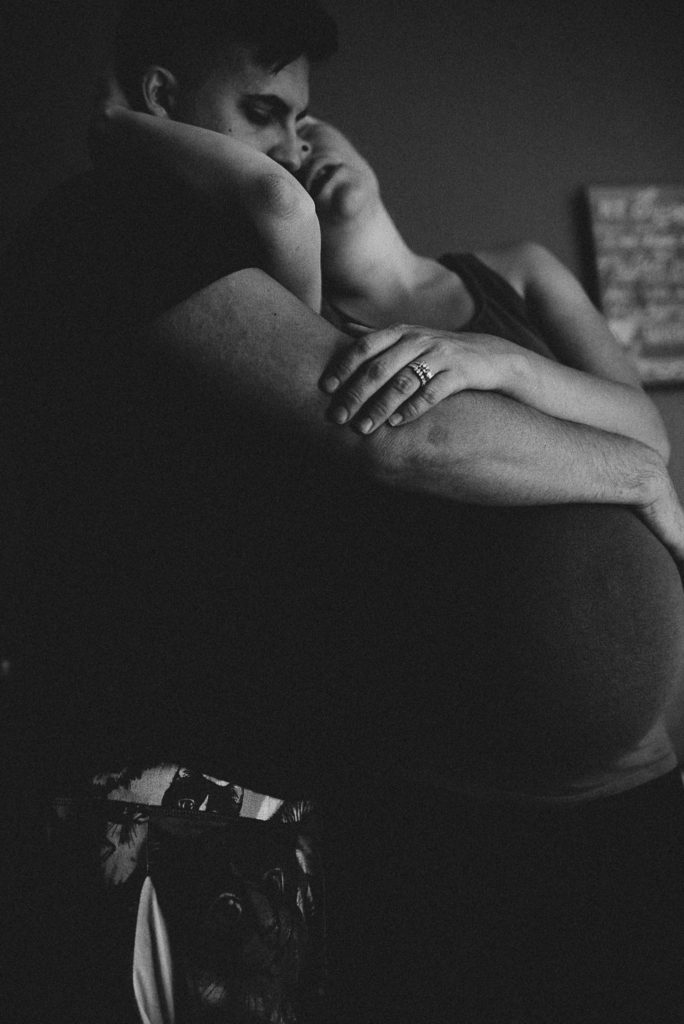 If you had your baby at your due date or after… how did you feel?  Tired?  Ready? Frustrated that it was taking so long?

Taylor?  Well, she was thrilled to carry her baby as long as she did.  After experiencing several preterm births, she loved every moment of her longer, seventh pregnancy.  This birth story is so lovely, I can’t wait to share it!

Before we jump in, may I ask you a favor? If you’re on facebook, can you run check and see if you’re following Happy Homebirth Podcast?  We’re growing and excited to get our resources in front of more and more mothers.  So help us out by clicking ‘like’, and maybe even sharing with your friends!

Okay, let’s get to the good stuff!

With their third child, they began following Mama Natural, and Taylor began becoming interested in homebirth

Taylor experiences Hypremesis Gravidum during her pregnancies, which occurred again during her seventh pregnancy.

During that time, her husband would help when he could homeschool after work, and she would do educational videos and audiobooks

After she got through the first weeks of sickness, she actually felt amazing.

Her midwife very much encouraged nutrition during pregnancies, so she feels she’s improved her nutrition more with each pregnancy

As someone who has gone into labor prematurely several times before, she was concerned that she’d begin having prodromal labor.  However, this last pregnancy, she didn’t even have any noticeable contractions in the last month.

She felt great, went on plenty of hikes, and went to the chiropractor

Magnesium supplementation was highly important in this pregnancy, and she felt it was of great help at keeping pain away

Her midwife came and checked her and she was 7 cm.  Everyone expected a quick labor from that point.  Little did they know, they were in it for the long haul.

Typically with Taylor’s births, as soon as her water breaks, she has her babies very quickly

However, because her baby’s head was never in a good position, her midwife did not feel comfortable going that route.

Taylor finally had a moment where she cried out to God, then said she felt like he wasn’t answering.  It was around this time where she realized that she was still holding onto quite a bit of fears from earlier in the pregnancy:  they initially thought the pregnancy may be ectopic, then they received scary news from an anatomy scan when the baby’s stomach couldn’t be visualized.  Though another scan revealed the baby was healthy, the fears still lingered. Taylor realized during birth that she was holding onto the fear that she may not get to meet this baby still.

Once she released these fears, suddenly her baby moved position and came down the birth canal.  Her midwife was able to break her water, and Taylor got into the birth pool.

At one point in the water,  Taylor was trying to read the scripture cards that she and her children had created together.  Her doula and assistant midwife came over and read the scriptures over her during labor.

The song that meant so much to her during pregnancy, Peace Be Still, was actually what was playing when her son was born.

What a lovely story!  Let’s head into this week’s episode roundup:

Alrighty, Before we head out, can I ask you to head to apple podcasts?  If you’re loving this show, could you support us by leaving a 5-star rating and review?  It’s an easy, free way to support the mission of Happy Homebirth.  Okay my friends.  That’s all I’ve got for you today.  I’ll see you back here next week!

Hey Mamas, let me interrupt for a few quick moments to share some great news!  I have a free class waiting for you!  Homebirth Mythbusters, The 5 myths you need to bust to have a happy homebirth is my free gift to all of you who are considering homebirth, planning your fifteenth homebirth, or are just curious to know more about what this is all about.  Head to myhappyhomebirth.com/mythbusters to select a time that works for you, and get started!  You’ll gain access to not only this incredible free masterclass, but you’ll also be given access to sign up for Happy Homebirth Academy AND an incredible BONUS Stack of resources.  So wait no longer!  Head to myhappyhomebirth.com/mythbusters and reserve your seat today!  Okay, back to the show!