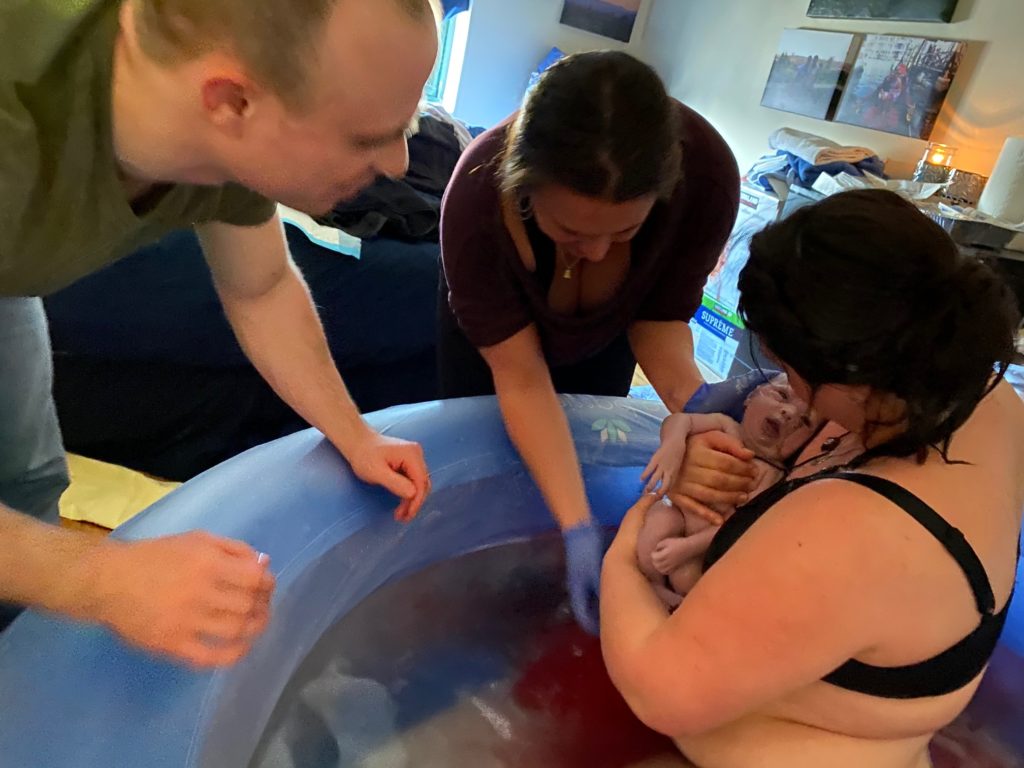 What do you do when your doctors don’t believe in your body, but you do?  What happens when hospital policy is so counter to your own beliefs that you have to be constantly on guard and fighting for your rights?  Where do you turn?

This week we’re speaking with Julie, who was faced with a number of situations and circumstances that required intense decision-making for herself and her family.  I know there are so many mothers out there who are hoping and planning to have successful homebirths after cesarean sections… I know this episode is going to be an inspiring and encouraging one for you.  Julie is such a strong mother, and her drive to do what’s best for her family is so obvious.

I want to give a quick heads up— the sound quality of this episode is definitely sub-par.  I’m not sure what’s going on with my mic while I record in zoom, but the quality lately has been driving me crazy. Just know that I know it’s a thing, and there were some feedback issues, too… so not the best quality, BUT I guarantee you’ll barely notice because Julie’s story is absolutely riveting.

And before we jump in I’d love to give a big thank you to our reviewer of the week, JandRFarmsTN.

Thank you so much, JandRFarmsTN, if you’ll e-mail me your address at katelyn@myhappyhomebirth.com, I’ll be sure to send you a happy homebirth podcast sticker.

Alright, my friends. Let’s dive in.  Please remember the opinions of my guest may not necessarily reflect my own and vice versa, and this show is not meant to prescribe or treat- it’s an educational tool, so continue to take empowered responsibility for your health and your family. 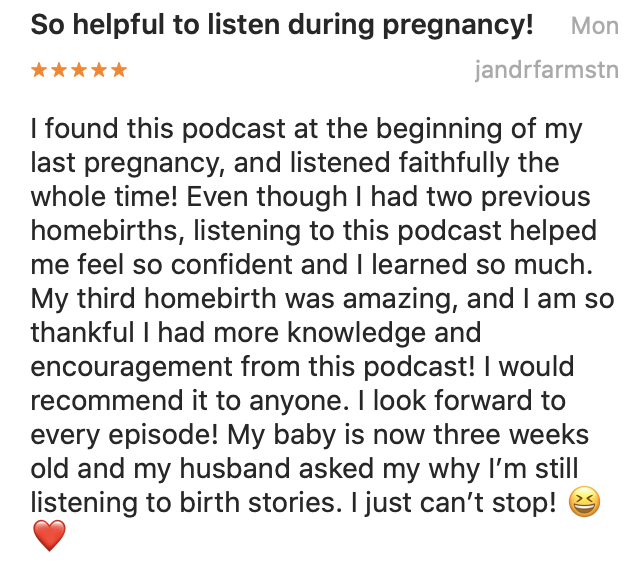 Julie had 3 miscarriages before having a full-term baby:

The first two were from a luteal phase defect, which she finished.  The second occurred immediately after a flu shot that her doctor counseled her to take.  She realized then that she had to take research into her own hands.

Julie wanted a midwife- her husband wasn’t comfortable with the idea of a homebirth, so they chose midwives at the hospital.  Julie said they were basically doctors with other letters beside their names.

She had diet-controlled Gestational Diabetes, though they pushed her to be induced.  Her body was not ready, she ended up with a c section.

Julie went back to the same midwife with her second, and they said she could only have a vbac if she went into labor naturally before 39 weeks.  When she didn’t, they scheduled her for a c section.  It was a traumatic experience— the room was loud, the doctors found a uterine “window” where, the scar opened up just upon touching it.  The doctors then began chastising Julie’s husband to “wear a rubber.”

During the pregnancy of her third baby, they knew they would need to flee from New York because the vaccination laws were removing religious freedom.

Julie was pregnant in NY, but researching hospitals in CT to see who would let her attempt a VBAC.  All of the hospitals were saying “no”.

Finally, she called Yale, and she happened to reach one of two doctors who are VBAC-supportive.

Julie drove 2-2.5 hours each prenatal for the rest of the pregnancy. They moved around 30 weeks, and when she reached 40 weeks, she began to realize that 2 of the providers would support her, but the 6 others were barely going to tolerate her attempting a vbac.

After weighing their options, Julie decided to go in at 41 weeks when she knew the OB would be a supportive one and have them do a gentle induction, rather than waiting for labor to begin on its own and have to deal with a care provider who was unsupportive of her plans.

Julie successfully had her VBAC with a 9lb baby, which was 2 pounds heavier than her others!

For a hospital birth, Julie says it was the best she ever could have expected in terms of care and support.

She did want students present so that they’d know that women can have a successful VBA2C, and she had practically every Yale student in her room by the time she delivered!  She hoped she could provide them with a positive image, and she did.

When she became pregnant with her 4th baby in April of 2020, the hospital policy was that she couldn’t bring her nursing infant with her to her prenatals, which was going to be practically impossible at that time.  She decided to go to another hospital who would allow her to bring her baby.  This was fine, until she found out the procedures for COVID… testing upon entrance, laboring in a mask, possible removal from her husband and her baby…

She came home and told her husband she wasn’t doing it.  She went back and forth between going to the hospital and simply refusing the test or doing something else.  She knew this would be creating a combative experience at the hospital, which would make things more stressful, possibly leading to a c section, or at least leading to a difficult time bonding with her baby postpartum under stress.

Julie decided to find a midwife who would take her, and she found a CPM who would.  She loved the care.  She mentions that her shoulders relaxed and she felt like she didn’t have to be on guard— they were on her side.

She decided not to share with her family that they were planning a homebirth, as she knew they’d be concerned.  After the birth, they said it all made sense that she wasn’t calling them complaining about her appointments with her doctor!

Her family said they were happy that she didn’t tell them because they would have been a nervous wreck!

The night she went into labor, she felt an urge to really clean her house.  Later when she went to the bathroom, she thought she’d dribbled some pee— but then she realized it was her water!  The water was not clear, there was meconium in it.  She called her midwives and shared a photo of the water, which they said was not of concern—it was just a light staining.

She called her mom and had her come from Long Island to pick up the kids— her mom arrives and gets comfy on the couch, thinking she’s going to be sleeping there (obviously, thinking they’re heading to the hospital).  When they start waking the kids up and putting them in the car, she’s completely puzzled!

After being in the pool for a bit, Julie’s midwife told her, “You’re a little too comfortable in the pool, I think we need to get out for a bit.”  Though she didn’t want to, she knew it would be best.  Instantly after getting out, Julie was practically in transition.

After her baby arrived, Julie was able to soak into the experience and the love instead of freaking out over what was going on around her.

Julie discusses how her midwives were adamant for her to rest postpartum, which none of her previous doctors ever discussed or pushed.

Okay, isn’t Julie incredible?  As we head into this week’s episode roundup, I want to cover a few topics a little deeper.