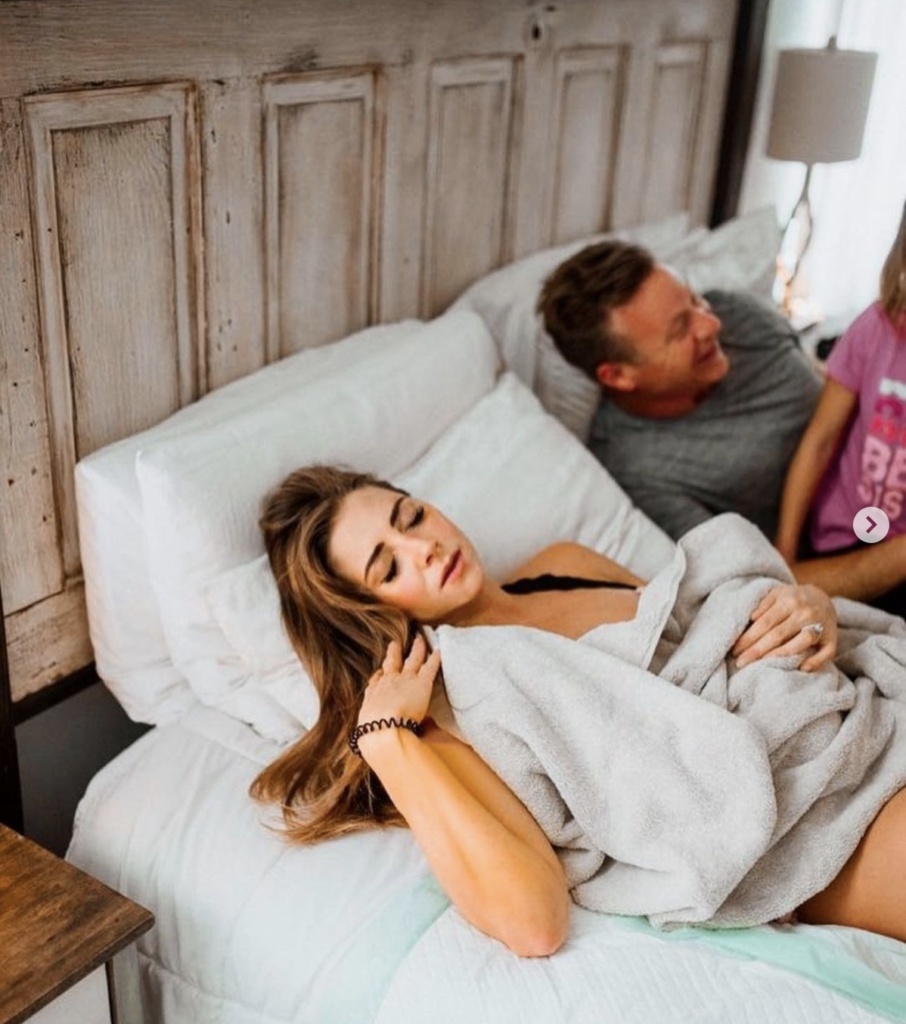 Which leads to better outcomes do you think, high amounts of unpersonalized intervention… or… space? Space to allow a mother’s body to do what it was designed to do?

This week we’re speaking with Miss Brittany Pride, a mother of 4 daughters and new member of the homebirth community.  Through Brittany’s stories, we’ll learn what style of care worked best for her and her family.

Thank you so much to our reviewer of the week, “Can I get more to like?”  Please e-mail me at katelyn@myhappyhomebirth.com so I can send you a Happy Homebirth Podcast sticker!

And of course, if you are loving this show, would you go show some love on apple podcasts?  It’s a free, relatively easy way to support the mission behind Happy Homebirth and get this show into the ears of the mothers who need it. 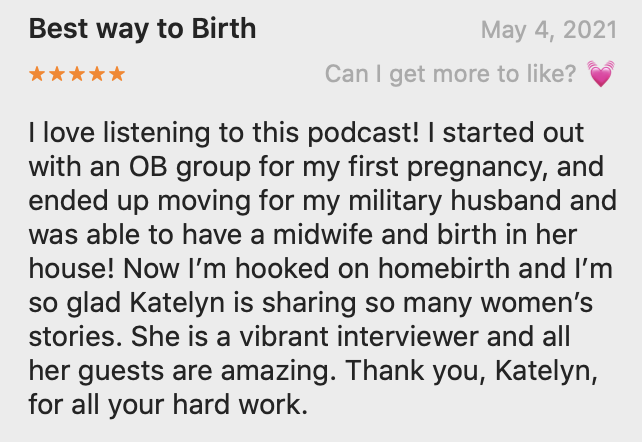 She lives outside of Nashville TN

Her 4th daughter was her first homebirth

First pregnancy- it was amazing.  She was a stay-at-home mom, so she was able to rest and nap whenever she was tired or sick.

She went into labor on her due date, she did not have a doula, which she learned was really important for her next time.

Her first labor was incredibly difficult, as her baby was malpositioned.  She didn’t know how to get her baby repositioned without help.  When she went to the hospital (using midwives), she was only 1 cm dilated after 20hrs.  Her cervix was behind her baby’s head— baby was low, but not putting pressure on the cervix.  On top of that, he water broke during triage, so there was no cushion beyond that point.

She ended up receiving an epidural as she was unable to relax.

Brittany feels that she learned so much from that birth— she did deal with PTSD after that birth.

“If you’re feeling bad about your birth, remember that it’s not your fault, you did your best, you’re still a rockstar, and you can have a better birth next time.”

Brittany notes that each baby and placenta and story is different— it can be different next time!

Having a doula does not negate a husband’s role, it enhances it.  Brittany’s husband says they’re so worth the price because it takes the pressure off the husband.  Long labors, malpositioned babies… so many things can happen that are unexpected.

Hiring a doula is a great way to capitalize on the experience and to allow your husband to focus on the aspects on birth that he wants to focus on.

With their third birth, they chose a freestanding birth center.  Brittany thought it may be her last birth, so they thought this would make the experience even better.

She enjoyed her experience, except for the fact that she was encouraged to push (even after she told them she didn’t want to yet— she already had a history of swollen cervices), and when her baby came out shockingly quickly, she had a difficult time breathing (said the midwives) and had to be transported to the hospital.  The midwives were frantic when this happened, and it was an incredibly chaotic experience.  By the time they got to the hospital, baby was screaming and crying just fine.

After this experience, Brittany knew that she would have a homebirth if she had any additional children.

With baby 4, they became pregnant in Oct of 2019.  Again, her husband said “this is the last baby!”  As soon as he learned more about homebirth’s safety, he was sold.

They decided to have a homebirth around 11 weeks.  Several of Brittany’s friends had used the midwife that she chose.  She has 40 years of experience and has basically delivered babies in the middle of the woods.  Brittany met with her and felt incredibly comfortable with her skills and experience.

Brittany’s due date was July 24th, and she’s always gone past her due date.  She loves being pregnant, and the end of pregnancy especially, so she wasn’t in a rush at all.

The week after her due date, she began encouraging good positioning and opening with walks, sex, prenatal massage and clary sage.

She had zero signs of labor over the weekend of her due date, but she woke up with leaking water.

She told her oldest to wear her “big sister” shirt to bed because you never know when you’re going to wake up with a new sibling!

Around dinner time, contractions began coming closer and closer.  They began doing pressure points around midnight, and her husband said he was going to go clean out the garage.   She said okay, and then texted him 3 minutes later asking him to fill up the birth pool!

“What happened in 3 minutes?!”

Brittany’s doula headed over around 3am and had called her midwife to come as well.  Her doula had her lie down on her side, and they did slow down a little bit, but not too much.  The midwife came around 4:45 am and her midwife checked her.

Brittany’s baby was 4 cm, but her baby was low (which was important to her).  Her midwife told everyone to rest until she just couldn’t rest any longer.

In the meantime she was using a TENS unit, which was incredibly helpful for her.

For Brittany, the most important aspect of relaxation for her was breathing.  Breathing in for 4, out for 8, which brought her back to center each time.  She said she couldn’t focus on the discomfort of the contractions because she was focusing on that.

Her doula kept reminding her “that’s one step closer to meeting your baby” with each ending contraction.

By 8am Brittany was getting in the birth pool.

She loved being in her own home, knowing where everything is, and not having to worry about when to leave the house.

Brittany had her midwife check her again at 8:30 to make sure that she was genuinely ready to push— she was so concerned about swelling.  Her midwife said, “Everything’s perfect Brittany, you don’t have any swelling.” Brittany’s midwife knew that’s exactly what she needed to hear, even without saying it.

Her husband had found an aquarium hookup for $4 that would allow for the water to be let out from the same hose, then put new water back in.

She pushed/her body pushed for 3/4 pushes

Her husband wanted to catch, because he’s caught all of the other babies.

He hopped in at the last minute and caught her.  The baby was behind Brittany, so they maneuvered the baby under her legs and to her chest.

Her oldest daughter came in right after the baby was born to watch the cord be cut.  The fact that everything was done right beside her on the bed and that her family got to be a part of it was amazing.

“In my head I kept thinking, ‘this is what birth should be like.’”

The least invasive birth ended up being the safest, most comfortable birth.

So many incredible aspects of birth came up in this episode.  Let’s go over a few together in this week’s episode roundup.