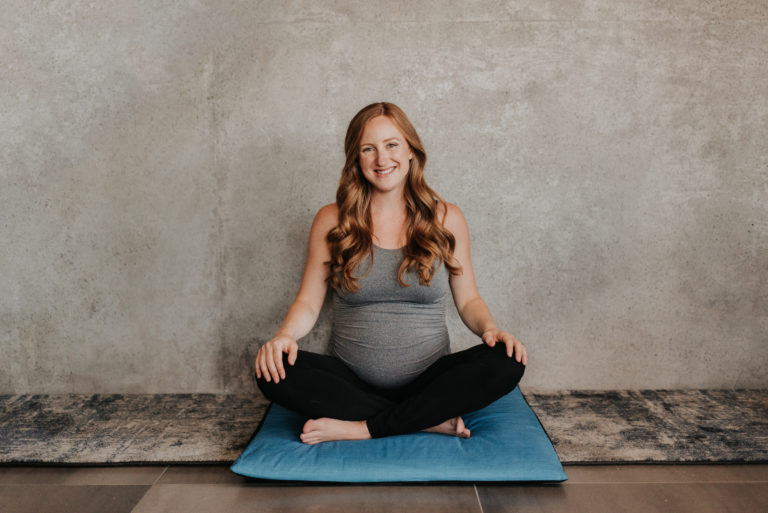 -Stephanie is a fitness and nutrition coach for new and expecting moms.

-She’s been working in the industry for almost a decade now.

– Stephanie began doing this work almost by “accident”… one of her clients became pregnant, so she realized she needed to learn more about pregnancy in relation to fitness.  She was a natural at it, and the mother, who had several pregnant friends, asked if she would do a group class.

-Through this experience, her career was born.

-When it came to preparing her own body for a successful labor and delivery, Stephanie said the things she considered were:

-Nurturing her body with proper fluids, eating an anti-inflammatory diet, and making sure she was getting all of the nutrients she needed

-She said it was important to make sure that she was not in any pain, because when you’re in  pain, the last thing you want to do is get up and do a workout.

-She mentions that for labor, our legs need lots of stamina, we need mobility in our hips, and we need overall strength and endurance.

-“Labor is a big interval session, right?  You get a contraction, you get some time off.  And then repeat!”

-“If you can work out in a way that almost simulates labor, then you’re in a good place when it’s actually time.”

-Stephanie saw a pelvic floor physiologist, a chiropractor and an osteopath during her pregnancy.

-Stephanie mentions again how important whole, natural foods were in her prenatal preparation.  She made sure to eat all of the colors of the rainbow, and if she had a craving for something unhealthy, she would try to recreate it in a healthy way.

-She also mentions how important supplementation was during pregnancy: A link to her guide for prenatal supplements is mentioned below.

-She feels it went pretty much as smoothly as it could be.  She wants to note that there was no ego about this- she did not want a homebirth at the risk of her health or her baby’s healthy.

-She was only 38 weeks and 3 days… “My husband said he knew I was in labor because the bathroom was cleaned!”

-The next morning, around 6 am, she felt some contractions and intuitively knew she was in labor.  Stephanie had not had any Braxton Hicks, but she felt confident that these were early labor contractions.

-She remembered her midwife saying try to get some sleep during labor, so she tried.  By about 7:30, she was ready to get out of bed.  She headed for the bath, but became overheated and got out.

-At this point her step sons were awake, so she let them know that she was pretty sure she was in labor, so not to worry if she bent over and moaned or had to work through contractions a bit.

-A while later, Stephanie called her doula to tell her that although the timing of the contractions was still all over the place, she was experiencing more and more pain.  Her doula suggested that she come over to work on some acupressure points to potentially get contractions more consistent.

-Stephanie’s mother was also on the way over- Stephanie made a “game time decision” to let her mom come to the birth.

-She discusses how beneficial her decision to hire a doula was for her birth experience.  Having someone there to help her determine what needed to be done at what time was invaluable.

-Stephanie mentions how vague the timeline is when in labor.  She doesn’t know exactly when her doula came, when she got in the tub, etc.  She does know, however, that her entire labor was 16 hours, 6 of those being classified as “active labor”.

– “By the time I was at the pushing phase, my legs felt like Bambi legs.”  Stephanie says she was unable to sit down or lie down throughout her labor, so her legs felt incredibly weak towards the end.  She mentions how grateful she was that she had trained for this exactly, because she can’t imagine how anyone could do this without muscular endurance in their legs!

-Stephanie says that the great thing about deciding to have an unmedicated birth was that she could feel everything.  When her midwife told her to keep pushing, Stephanie responded “I’m done pushing for the moment” because she knew what her body was telling her to do.

-She mentions how there were those moments of defeat-like feelings when she would push and feel baby’s head come closer, and then retreat.  But in retrospect, she thinks of how useful that system is- stretching mom and preparing her body for crowning.

-Stephanie’s baby’s head finally emerged.  Baby’s body, however, did not immediately glide right out.  Her hands were up at her chin, and her arms stuck to the side of baby’s torso…. Making for a much wider circumference, more similar to pushing out the head still.

-“At that point, I knew I had to push beyond where I could,” Stephanie remembers.

-Moments after, she began shaking and her teeth began to chatter because of all of the adrenaline.

-The midwife got an oxytocin (Pitocin) shot ready for Stephanie to deliver the placenta.  Stephanie said, “Hang on a second, what’s that for?”  The midwife responded that it was to get the placenta out.  Stephanie used the BRAIN acronym and asked about the benefits and risks… she then asked if they could wait for the placenta to be birthed on its own.  The midwives said waiting an hour would be fine.

-Within 20 minutes, the placenta was born on its own without the use of Pitocin.

-Stephanie’s mom cut the cord, which was very special.

-To Stephanie, having a homebirth didn’t feel like an act of bravery.  In her own head, she was avoiding the things she was scared of: the hospital, the cascade of interventions, etc.

-“During the whole labor, I remember I kept saying, ‘I’m going to die.’  But I knew I wasn’t actually going to die, I just needed everyone around me to know how bad it hurt!”

-Stephanie said she read the book The First 40 Days, which very much inspired her take on postpartum.  Personally, she didn’t want to stay in bed for 40 days, but 9 days in bed was perfect for her.  After that, she said she was beginning to feel sore from the inactivity, so she knew it was time to begin moving!

-She took the first 6 weeks as a time to absolutely not work out.  Stephanie says that in the whole scheme of things, really, what’s 6 weeks?

-Stephanie mentions how if you push yourself too hard at the beginning of postpartum, then you might not be able to do the things you typically do later.

-She says it’s important to remember that you aren’t truly starting over, your going back to the foundation and rebuilding up and out, starting with with the pelvic floor and core breathing.

-Stephanie says, “And I’m six months postpartum and I’m still working up.  I’m not back exactly to where I was before, but why should that be the goal?”

-Stephanie discusses the fact that if she were to tear her ACL, at her 6-week appointment, her doctor would clear her for physical therapy… NOT EXERCISE!  Why then, after birth (a physical trauma), are doctors immediately clearing moms for exercise at 6 weeks?  We need to shift our perspective when it comes to postpartum recovery.  “We need to shift the way we look at postpartum recovery.”

-“It took almost a year to build that baby… give your body that amount of time to recover from it.”

-We have to be realistic with ourselves and our expectations of our bodies postpartum.

Glowing Mama To Be Course: https://stephaniesibbio.clickfunnels.com/glowing-mama-to-be