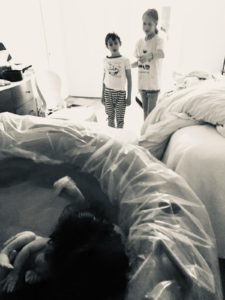 Babies wait for no one or no thing.  No matter what’s going on in the world, they will still be born, and we as mothers have to figure out how to cope.

I know that so many of your births were and are being affected by Covid-19.  My heart goes out to you, as this has changed the landscape of birth on many levels.  Of course mothers who planned to give birth in the hospital have been affected, but this is also true of mothers in the homebirth setting.  Today we will hear from Yosefa, who gave birth at the beginning of the Covid-19 pandemic.

This interview was incredibly special, because we were able to be joined by Yosefa’s sister Yakova, who currently resides in Israel.  Yakova is a midwife with several credentials, I might add, and although she was not able to physically be at Yosefa’s birth, she was able to support her virtually.  It’s such an amazing story!

Yakova went to a friend’s birth and ended up acting as support person.  With this one experience, she realized she was called to some type of birth work.  She began working as a doula, then became a midwife.  She gained the Certified Midwife credential, then went back to nursing school and became a Certified Nurse Midwife.

She and Yosefa were pregnant with their first children at the same time, giving birth only 10 days apart.

Yosefa’s first two children were born in a hospital birth center run by midwives in Australia.  When she became pregnant with her third child back in America, she realized that having a homebirth would be the most similar experience for her in this country, given our more medicalized approach to birth in the hospital.

Once deciding on a midwife, she mentioned her choice to her sister.  It turned out that Yosefa’s midwife was the exact same midwife Yakova had used for her third birth, and the assistant was one of Yakova’s former roommmates.

Yosefa went into labor only one week after schools closed.  This was an extremely fear-based time of the pandemic.  She had concerns around bringing in any support personnel, and even family.

Yakova was planning to travel with her children to the US to be at Yosefa’s birth, but Israel was very quick to shut down travel through infected European countries.  Because Yakuza’s flights were to go through either Italy or France, she was unable to travel.

Because Yosefa’s labor began with the rupturing of her membranes, she decided to try some activities to stimulate labor.  Acupuncture and nipple stimulation were very helpful in this and brought on intense contractions.

As labor progressed, Yosefa relied on her sister Yakova for support.  She kept her AirPods in and Yakova monitored her labor in that way.

Yakova was even the one who called the midwife for Yosefa!  She also spoke to Yosefa’s husband about tasks that needed to be done.  Yosefa’s birth was happening right around the beginning of their Sabbath day.  Because of their religious practice, Yosefa’s husband was uncertain about whether he would be able to clean the birth pool and set it up for Yosefa, as when they opened it up, it was moldy.  Yakova spoke to him about how in one of their Holy Books, it says that a laboring mother supersedes all else.  So much so that if a blind woman laboring asks for a candle (typically not lit on the Sabbath), a candle should be lit for her.

Yosefa’s third labor was far more intense than she expected.  She felt that this labor truly showed how different each birth is.

What a beautiful story.  I’m so delighted we were able to make this 3-way interview work!  As we head into the episode roundup, I have a few thoughts I’d love to share: